Among watering-holes and restaurants catering to perpetually unmarried folk who like their prices high, portions small, and wait times in excess of 90 minutes, I’ve found bathrooms appointed with one of two brands of automatic hand dryer (often in addition to linen-infused paper towels for the environmentally unconcerned)…  First up is the Dyson Airblade, that darling of the National Sanitation Foundation (NSF), whose air-handling innards are said to smite 99.9% of germs that cross its path.  Its womb-like chamber beckons your dripping fingers and promises to dry them in just seconds!  But crimony – it’s a stupid British import!

Well, fret not, Francophiles.  Its challenger is as all-American as school shootings and cure-all tax cuts, made with human hands (right?) in the hinterlands of Springfield, Massachusetts.  Its rocket propelled airstream taunts those fey Dyson hacks with a tagline worthy of Earth’s lone military hegemon:  Feel the Power up your butt.  (Italicized text mine.)  It’s a confident challenger for the title of enviro-savior Most Worthy for Yuppy Hands.

Here’s the tale of the tape…

*Based on the number of “Miss-ippis” counted before the test subject declared his hands dry.  “Miss-ippis,” here, are a truncation of “Mississippi,” a word believed to take one second to say.  The precise origins of this truncation are unknown; tag football players, however, have said that its use allows defenders to cheat the “seven-second” delay required before they may rush the quarterback (blitzes excepted). Source: DHillz.
**I’d trust a cracked-out street urchin more than these figures.
***Source: Acoustical Society of America.

But which of these technological marvels is superior?  After using literally tens of these machines over several months, I believe that the quantitative measures above (some of which I’ve collected personally and at great expense (at the bar)) misstate their efficacy.  Because, if there’s anything I’ve learned from our disinformation age, it’s that “objectivity” has its limits.  So let’s dispense with the mumbo-jumbo and address the factors that YOUR hoity-toity establishment should consider when outfitting its speakeasy-inspired restroom…  The happiness of kitchen-phobes, functioning alcoholics, and passive-aggressive louts commands it!

Reality check:  Available in chrome or slick, stainless steel, the customer can see his woozy reflection as he approaches the machine.  Yet more proof, perhaps, that he should call it a night and save womankind from his pawing advances.

Intuitive design: A patron doesn’t need to be able to read much English or translate complex global symbology to utilize this device.  All he has to do is heed the invitation – a taunt, really – to Feel the Power and WHOOSH, a warm onslaught of forced air descends upon his digits.

Patriotism: The Xlerator embodies a quintessentially American approach to problem-solving…   If something doesn’t “work,” just crank up the horsepower and put it in a fancy box.  Brought to you by the same nation that created Viagra. You’re welcome!

Blowback: The jet-wash might drive the tipsy to their knees.  Plus, depending on how one cups her hands, a fart-like sound may result.  Mean girls don’t need any further

ammunition, especially in the restroom, gossip emporium that it is.  Space your hands carefully!

Noise:  Forget the decibels.  The Xlerator sounds like an aggressive panhandler shouting through a mouthful of Cheetos, backed by a surging 18-wheeler bouncing over uneven pavement.  Heed your audiologist and remember – paper towels are an option.  (Don’t worry, Mother Earth’s used to your neglect by now.)

Gentility:  In these hardscrabble days of post-bubble recovery – where even the industrious struggle to pay for their twelve-dollar cocktails – Dyson’s breezy swirl not only envelops and cossets your delicate hands, but also evokes an afternoon at your country cottage, Pimm’s cup in hand, and the bustle of chesty servants nearby.  Release the hounds!

Core body strength:  It’s the latest exercise craze!  Follow me…  Tilt 45 degrees at the waist and dangle your arms over the Airblade’s maw.  Now, in a controlled manner, lower your hands into the dry chamber using only your lower back.  (If you wish to tone your arms instead, keep your back steady and work those flabby bi/triceps).  Do three sets of ten reps each.  It’s perfect antidote for our sedentary times.

Fear factor:  Humans are hard-wired to NOT stick their hands into dark, confined spaces, lest a hungry saber-tooth tiger or Republican back-bencher strike at their unsuspecting limbs.  And what if the opening snaps shut, like a Venus flytrap?  Sure, they’ll call it an unfortunate “malfunction,” but trust me, the robot takeover is nigh… 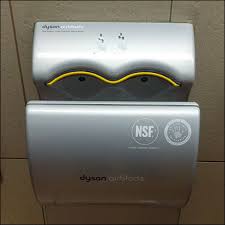 The “bad” touch: Try as you might, there’s no way to stop your hands from glancing along Dyson’s ballyhooed “airblade” strip.  It’s fitting, too, that the strip’s colored yellow, since, once you’ve touched it, you’ve effectively handled the penis of every man who’s ever urinated in that restroom.

Primordial ooze:  Whoa, check out that puddle of dust and mire at the bottom of the dry basin!  It’s the staging area for the next microbial assault!  Coming soon: Hospital Masks!

As you can see, it’s a tough decision, and one you must make in accord with your own conscience. But I hope and pray that, whatever you decide, you remember this: there ain’t no art-deco version of the Airblade and choosing it would ruin your carefully crafted mid-20th century aesthetic.  So buy American, you Continental fop!

But no pressure, OK?